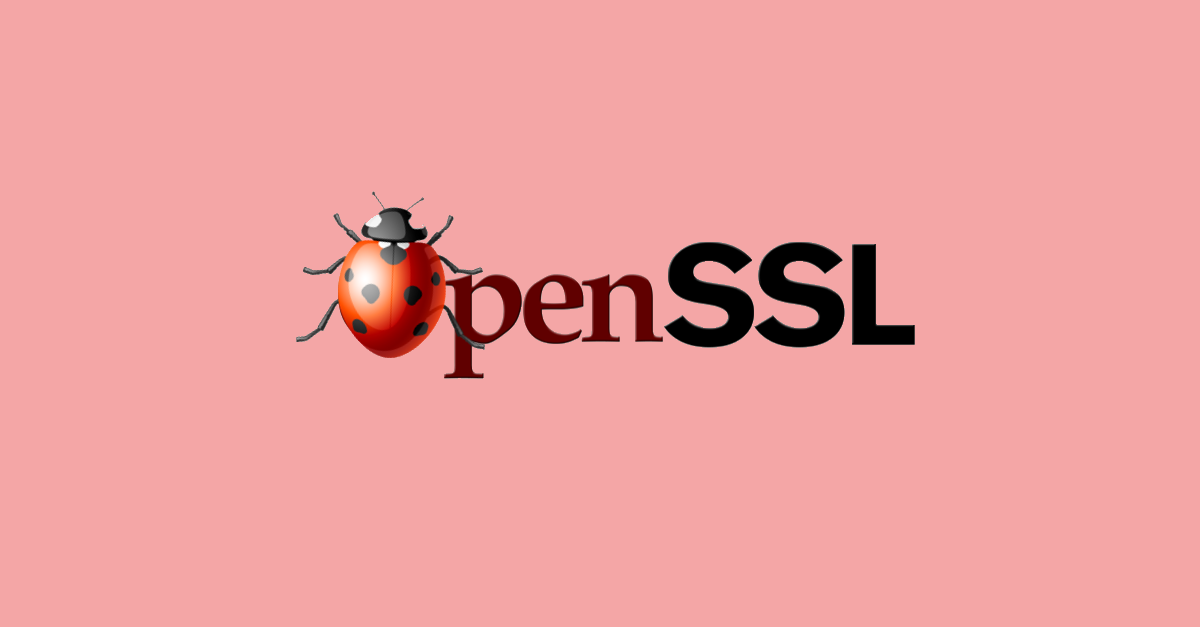 The OpenSSL Management Committee (OMC) and the OpenSSL Technical Committee(OTC) are glad to announce the seventh alpha release of OpenSSL 3.0.

$ openssl sserver -key key.pem -cert cert.pem -notls13 -notls12 -www. If you're using an earlier version of OpenSSL, you might not have the -notls3 flag available. If this is the case, remove the flag because the version of OpenSSL you're using doesn't support TLS v1.3. 1 Main Changes in OpenSSL 3.0 from OpenSSL 1.1.1 1.1 Major Release. OpenSSL 3.0 is a major release and consequently any application that currently uses an older version of OpenSSL will at the very least need to be recompiled in order to work with the new version. OpenSSL is a full-featured toolkit for the Transport Layer Security (TLS) and Secure Sockets Layer (SSL) protocols. It is licensed under an Apache-style license. This tutorial will help you to install OpenSSL on Windows operating systems. Step 1 – Download OpenSSL Binary Download the latest OpenSSL windows installer file from the following download page. Download OpenSSL for free. This project offers OpenSSL for Windows (static as well as shared). It supports: FIPS Object Module 1.2 and CAPI engine. OpenSSL has released a security update to address vulnerabilities affecting versions 1.1.1–1.1.1j. An attacker could exploit these vulnerabilities to cause a denial-of-service condition. CISA encourages users and administrators to review the OpenSSL Security Advisory and apply the necessary update.

As any alpha release, the code is still experimental and things can stillchange before the feature and API freeze planned for the beta release.We are still in the process of reaching feature completeness, and polishingand improving the code, while fixing the issues that we consider blockingfor beta.

We have been talking about the development of the next major release of OpenSSLfor a while, and you can read more about it in previous blog posts and read moreabout the planned changes in our design document.

For more details on upgrading to OpenSSL 3.0 from previous versions, as well asknown issues and the status of current development, we collected specific noteson the OpenSSL wiki. We strongly encourage consulting (andcontributing to) this wiki entry, also to discover the most important changes inthe upcoming OpenSSL 3.0 and how they might affect you and the code youmaintain.

Let’s start by addressing the elephant in the room: according to ourcurrent release schedule we are longoverdue a beta1 release, yet this post is about alpha7, which is fourversions after what we originally envisioned for the alpha development stage.

The reality of things is that, at the moment, we are still not ready totransition into the next development stage, because of the high bar that theOpenSSL Release Strategy sets for this transition: I will talk more about thisafter the next section, as the discussions on this and related topics tookdefinitely the lion’s share of the virtual face-to-face meetings.

For now let’s focus on what is in this release, rather than what is not yetthere.

It has been quite some time…

The alpha7 release comes 10 weeks after alpha6, and this post is over 16weeks since the last one I wrote about an alpha release: many things havehappened since then, and I won’t even attempt to summarize all of them inthis blog post.

For the lovers of statistics, let’s ask git how many things changed sincealpha6: 651 commits from 258 PRs, 1374 files changed, with 76630 insertionsand 71205 deletions.To put these numbers in perspective, since the alpha1 release, back onApril 29th, up to alpha6, I count 766 commits from 363 PRs.Clearly, it was time to release a new alpha!

I will talk about the upcoming releases in the next section, and, as Imentioned, I will not even try to summarize all the things that became partof the codebase since alpha6: I rather intend to flesh out this sectiontalking about three things I am personally excited about and that I hope canwhet your appetites, enticing you to download and try out this new release andgive us your feedback.

In alpha6 they were known respectively as OSSL_SERIALIZER andOSSL_DESERIALIZER, but definitely the rename is not the only thing thatchanged about them!

Sidenote: In the rest of this post I’ll use capitalized “Provider” toclearly refer to the new OpenSSL Provider concept, illustrated in the3.0 design document.

As a researcher I am very excited about the potential that these changes,together with the rest of the architecture redesign around Providers, will allowto study and deploy new algorithms, transparently for the whole softwareecosystem built on top of OpenSSL 3.0.

As part of the requirements for the upcoming FIPS validation, we had to includesupport for RSASVE, RSA Secret-Value Encapsulation, fromSP800-56Br2.While, technically, it may not qualify as a full-fledged Key EncapsulationMethod (KEM), depending on the definition used and the expected cryptographicproperties, its usage pattern from an API point of view fits the KEM API nicelyand intuitively.This led to the decision of modeling a dedicated OSSL_OP_KEMoperation that allows Providers to implement asymmetric KEM algorithms and makethem available to applications via the API functions EVP_PKEY_encapsulate()and EVP_PKEY_decapsulate().

This means for example that, in the context of the ongoingNIST Post-Quantum Cryptography (PQC) Standardization Process, it is nowpossible for OpenSSL 3.0 Provider authors to provide KEM implementations withoutcomplicated workarounds (ab)using the public key encryption and keyderivation APIs to make these primitives available to applications and withouthaving to fork libcrypto to provide a custom API for these operations.

Building on the previous topic, and on top of theFully Pluggable TLSv1.3 Key Exchnage announced as one of the bigchanges in alpha4, the existing functionality has been extended to allowProviders to plug-in custom TLSv1.3 groups modeled after the KEM scheme, ratherthan the typical Diffie-Hellman-like key exchange scheme (for brevity, I’llrefer with KEX to the latter kind).

One of the things possible with the new capability is for OpenSSLProviders to aid in testing the deployment of PQC orhybrid KEMs in TLSv1.3, while staying fully compatiblewith RFC8446, but doing so completely transparently for thesoftware ecosystem built on top of libssl, and without having to fork theOpenSSL codebase.

It’s a great tool for the experts participating in the PQC standardizationefforts, and ultimately for all users, even the ones not using OpenSSL, as Iexpect it will have a positive impact on the standardization effort even just bymaking it easier to test real world deployments of these algorithms for anyone.

Virtual face-to-face meetings, and the things to come

At the end of September, the OTC and the Committers finally managed toorganize Virtual Face-to-Face meetings.We had the opportunity of discussing many things, show off our lockdownbeards and hair, and in general discuss and harmonize our collectiveunderstanding of the requirements to finally reach the point in which we areready to transition into the next stage of the development cycle of OpenSSL3.0: the ever-shifting release of OpenSSL 3.0 beta1!

Starting from these, and with feedback from the larger Committers base, the OTChas since worked on a technical document to determine the tasks we still need toaccomplish before the beta readiness check and on a checklist to ensure allthe goals required for a beta release are accomplished, to then let the OMC approve thetransition into the next stage of development towards OpenSSL 3.0.0.The first document has been finalized and approved, and we areusing the GitHub milestone for 3.0.0 beta1 to sharethe progress towards this goal.The second document, the “beta readiness checklist”, is still adraft under OTC discussion, and the OTCdecided to hold weekly OTC online meetings until beta1 release,to finalize these last details and timely steer development towards thecompletion of the remaining tasks.

Another important item that was discussed is the recommendation for the OMC torelease the alpha7 release this post is all about, and adopt a 3-weeklyschedule of alpha releases until the release of beta1: the recommendation hasbeen ratified by the OMC with avote that was closed this Tuesday.

While talking about releases, both within the OTC and the Committers meetings,we discussed how, for our Long Term Support (LTS) releases (that, like anyother release, by our Release Strategy, are eligibleto receive bug and security fixes only), it might be advisable to also plan“LTS+” releases, in lock-step with the parent LTS release, that wouldexceptionally allow the inclusion of some new features:

The proposal to amend the Release Strategy wasrecently published, and is currently underconsideration by the OMC.If it is accepted, it would be possible to revisit some OTC decision thatprevented the merge of PRs to add platform support in the 1.1.1 branch,for example S390x backports, and schedule LTS+ releases alongsidethe future 1.1.1 releases.While regular releases would keep serving those users that require the extremelevel of stability of our current policies, the addition of LTS+ releases wouldserve users and distributions that would welcome these specific classes of newfeatures.In many cases it would benefit all users alike, because a considerable part ofour Contributors working for distributions currently has to invest resources inmaintaining such backport patches independently for their users. Once thiseffort is merged upstream, their maintenance workload would be reduced and“deduplicated”, allowing them to focus on other areas of the project and onnovel contributions.

This is not an official announcement to report all the minutes of the meetings,so I’ll cut this section here: the members of the OpenSSL Project are well andvery busy, giving their best to deliver a quality major release as soon aspossible.For those interested in a more detailed account of the latest OTC activities, Iremind you that the OTC strives for openness and transparency, so most of thediscussions or the votes following the discussions are available on theopenssl-project mailing list.

Last, but not least: Our Community

I like to conclude these posts with what I believe is the main message: theOpenSSL Project is what it is today thanks to its community of users.A large part of all the improvements so far has been possible thanks to thefeedback and help from the community that is assisting during the alphadevelopment stage.So we wish once more to reiterate our thanks for all the feedback and thecontributions from the users and developers that are testing the pre-releaseversions of OpenSSL, which are vital to the development process of the nextrelease.

We are always keen to see oldtimers and newcomers alike proposing issues, fixesand contributions, not only in the form of code, but also for manpages and wikidocumentation. At this point, it is particularly important to also make surethat the documentation for the new architecture, for the new features, and forthe new deprecations and their replacements is available, complete, up-to-dateand sufficiently clear for external users.We prioritize GitHub issues and pull requests as the favourite channel forcontributing to the OpenSSL 3.0 project, but any form ofinteraction, including on the openssl-users mailing list, isalways welcome.

The feedback from the community, and your involvement in testing externalapplications and ENGINEs against the next version of OpenSSL and improving thedocumentation is crucial to the continued quality of the OpenSSL Project.